WE ARE BACK!
Its been a while, but Wareham and Purbeck Badminton Club are pleased to announce, that as of Tuesday 3 August 2021, we will be restarting our weekly badminton sessions at The Purbeck Sports Centre, Worget Road, Wareham BH20 4PH, 7:45pm, start. 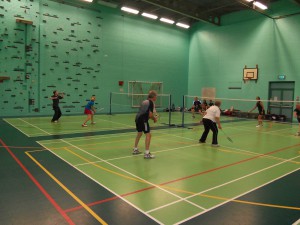 Wareham and Purbeck Badminton Club was formed in June 2014.  The emphasis on club nights is for everyone to play in a friendly and competitive atmosphere where people can enjoy the games and be part of an improving and forward looking club.

We are open for new players to join the club, but as we are now established we do expect a reasonable level of ability, so unfortunately the club does not cater for beginners.

We enter league teams in both the Poole & District Badminton Friendly League (PDBFL) and the West Dorset Badminton League.  Last season was both competitive and fun, resulting in the mixed team finishing fourth in the (WDBL) and the men’s team finishing second in their league.

Not all club players enter competitive teams, but where ever possible those interested in league play will be given an opportunity to play in matches.